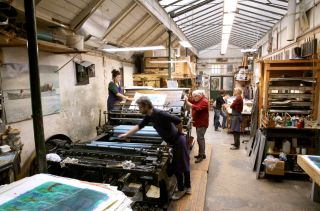 CLOT, BRAMSEN & GEORGES, today the oldest printing workshop in Paris, was founded by Auguste Clot back in late 18th century, where he was known as the capitals finest art printer.

Not only due to his skills, but not at least, the new way he mixed the various colors in the printing process attracted the young “Nabis” who in Auguste Clot found a true and highly professional inspirator. As the predecessors, the Impressionists, Vollard also ordered prints by the young “Nabis” to be a part of his famous graphic albums.

From 1896 the most beautiful works were printed at Clots presses, signed by Degas, Cézanne, Renoir, Sisley, Redon, Bonnard, Vuillard, Signac, Munch, Rodin and many others.

In 1934 André Clot, the son of the founder Auguste Clot succeeded his father as daily leader. In this period, Rouault, Matisse, Denis, Roussel, Guillaumin, Foujita and others had their time in the workshop

In 1963 the Danish lithograph Peter Bramsen enters the workshop as associates.

In 1965 together with the founder’s grandson Dr. Guy Georges they found EDITIONS ATELIER CLOT - publishing prints.

In 1988 Christian Bramsen enters the company as associate, and a guarantee for the high professional standard will maintain as it was founded for over 100 years ago. Christian Bramsen is international oriented, and among others, he arranges retrospective exhibitions all over the world, mostly focusing on a specific artist and his works created at the workshop.

From 2004 Morten Brunholt takes over the established sales representation in Scandinavia, and as from 2013 now also a part of the Scandinavian publishing activities.